HEADING towards the CBD from the Valley, I ventured into the start (or end, depending which way you’re going) of  Queen Street which ultimately leads on to the Mall and the river at Victoria Bridge.

It’s a busy built-up area but glance up at 540 and there’s another very cool statue by Cezary Stulgis, who was also responsible for the Guardian (Day 31).

This time it’s The Passenger, a commuter clinging to the strap as he stands on the train, of which there is a window and panel in the background.

It’s all well off the ground against the side of the building and he stands looking out towards the street, ready to catch the eye of passing bus passengers.

With his steely stare and pose, suitcase in hand with an open jacket and baggy trousers, he reminds me of the many such angular statues of workers that populate the Russian cities.

He’s made of galvanised steel with a stainless steel background and took his place above 540 Queen Street in 2003. 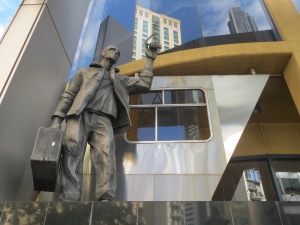 Just around the corner is Clark Street, a quaint little lane stretching up the hill and although not cobbled like many I have seen in Spain and Italy, it still makes a scene worth photographing. 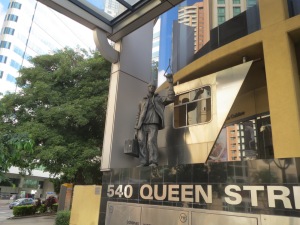