THERE are six huge fluted Corinthian columns worthy of the Roman forum facing the street, but step inside and it’s more like Dr Who’s Tardis.

The heritage-listed Masonic Memorial Centre at 311 Ann St launches an assault on the senses that transports the visitor to another place and another time – well, it certainly doesn’t feel at all like being in Brisbane in 2013.

Marble, brass and granite create a visual feast while the smell of old timbers evokes a sense of mystery and times past.

The origins of Freemasonry can be traced to the 14th century and the “craft” has a reputation for being steeped in secret rituals, all of which adds to the mystique of entering these hallowed halls. 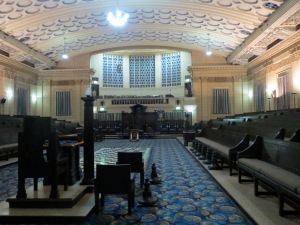 Free guided tours are conducted Monday to Friday at 2pm and after being brought up short by the discovery of the Corinthian columns at the front, I made it my mission to take the tour. It was certainly worth the effort.

While in awe of the building, intrigued by the Freemason concept and mystified by some of the trappings, in the end it was not as much of a secret society as the Da Vinci code would have us believe, even with the all-seeing eye watching us.

I never did find out though, why the giant letter “G” hangs from the centre of the ceiling of the meeting rooms, but that’s my fault. I could easily have asked as the manager (not to be confused with the Grand Master) leading the tour was happy to answer questions and he did say that the Masons made everyone welcome – Catholics, Protesants, Muslims – you name it – the only stipulation being a belief in a supreme being by whatever name.

There is also a lot of reverence and reference to Anzac Day, making me think this really is all about ordinary people who do extraordinary things.

It’s certainly not at all what I remembered of the Grand Poobah at Fred Flintstone’s Loyal Order of the Water Buffaloes.

Now, back to this amazing space which opens up a new world behind the dominating Ann St façade of sandstone columns, each 1.5 metres in circumference and four storeys high, and how it all came about.

The first Masonic Lodge was formed in Queensland in 1859 under the jurisdiction of the United Grand Lodge of England, and a temple built in Alice St in 1886.

Land was purchased in Ann St at the end of 1921, the same year the United Grand Lodge of Queensland was formed.

Architects were invited to submit designs and in 1927, Worshipful Brother Lange L. Powell’s plans for a classical revival style temple were accepted.

There would be four storeys over a basement and it would be built of stone from Helidon in the Lockyer Valley, marble from Chillagoe in North Queensland and brick.

The foundation stone was laid by the Grand Master on Anzac Day, April 25, 1928.

Perhaps it was because all the key people were Masons that it went ahead without delay and despite its size and spectacular craftsmanship was ready for its official opening by the Queensland Governor on December 10, 1930.

That was an awful lot of money and although the temple is now insured for $14 million, it is in fact priceless as the workmanship put into it by lodge members of the day simply cannot be replaced.

The ground floor has a large circular space with Doric columns enclosing a floor in various shades of marble and with an eight-pointed star inlay. 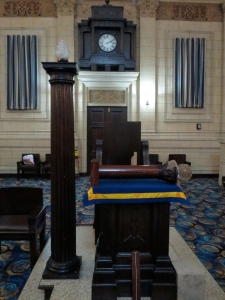 Centrepiece is a tall, rose marble Urn of Remembrance.

Head up one of the two elegant and winding marble staircases that meet at a central foyer, all the way to the top floor and this is where you enter the Tardis – a huge and magnificently appointed Grand Hall that comes as an utter surprise.

The building from the outside just doesn’t seem big enough to be hiding such a vast space on its top floor.

This is used mainly for ceremonial occasions as the building is the headquarters for the State’s 10,000 masons from 300 lodges.

The furniture was made on site.  Logs of northern silky oak, maple and cedar sourced locally and from Atherton in North Queensland were lowered through the roof to be cut and carved by joiners working in the open space.

It was made in the 1890s and was used in Alice St before being relocated to the new grand hall in 1930.  It still keeps the time for every clock in the building. 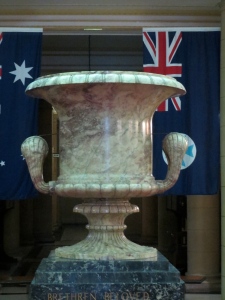 A choir loft has an openwork plaster screen which has been slightly curved to give the effect of an apse while the organ is the fifth largest in Queensland, its pipes hidden behind plaster fretwork.

Detail in the ornate ceiling is breathtaking, each panel delicately picked out  in gold paint while elaborate open plaster scrollwork, which is part of the ventilation system (remarkable for its day) is in gold leaf.

When part of the hall was renovated a few years ago, it was expected the gold leaf would cost a bomb to fix when in fact, it cost only $7 such was the quality of workmanship of the original 60 years earlier.

It’s a surprising secret place, even if it’s not that big a secret any more.

There are guided tours Monday to Friday at 2pm, and it’s well worth seeing. 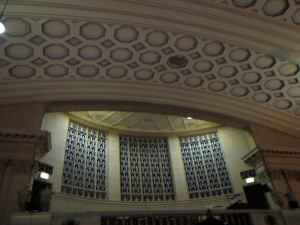