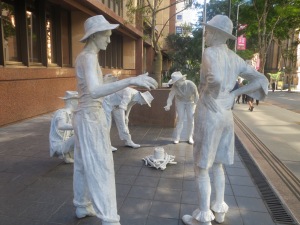 IT’S well known and well documented that Brisbane came of age in 1988 when it hosted World Expo.

It blossomed in the spotlight of the international stage and after the six-month party, continued to grow into a modern, cosmopolitan city – and has never looked back.

The single greatest legacy of Expo 88 would have to be the South Bank which, rather like London’s Isle of Dogs, was turned from a dodgy city fringe into a fashionable and useable riverside precinct. 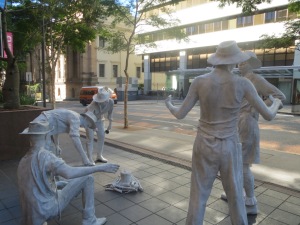 There are many other souvenirs of Expo scattered around the city, not least of them being the white sculptures outside the Department of Primary Industries  building at the George Street end of Ann Street.

Called “The Drovers” the five lifelike human forms around their billy boiling on a camp fire, are a piece of rural Australiana right in the middle of the city.

They also make  a fun stage for a photograph. 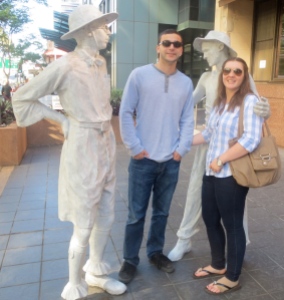 Until my Quebec visitor asked “what’s a drover?” I hadn’t stopped to think that this quintessential Australian worker and personification of our bush heritage may not be instantly recognizable everywhere.

“Someone who drove  herds of cattle and sheep through the Outback … a sort of Australian Rawhide,” I jabbered before turning it over to the great bush poet Henry Lawson, and a quote from the school reader:

Our Andy’s gone with cattle now, across the Queensland border.

He’s left us in dejection now; our hearts with him are roving.

It’s dull on this selection now, since Andy went a-droving.”

And here stands Andy and his mates in downtown Brisbane. 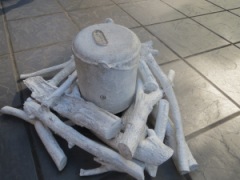 A more appropriate description is provided on site:

“One of the greatest successes of World Expo 88’s streetscapes was a series of compelling white sculptures called The Human Factor.

“The figures featured in The Drovers are five of almost 80 used in the series which portrayed people in everyday situations, all frozen in time, capturing the essence of life in Australia.

“Originally created in fibreglass, many of these sculptures were purchased at the end of Expo 88.

“The Drovers was purchased by the Department of Primary Industries and installed at this location in 1989. 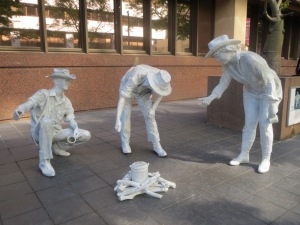 “In 2005, the Drovers was recreated in cast aluminium.

“This preserves these important monuments, which remind the people of Brisbane how much Expo 88 contributed to our city’s growth.” 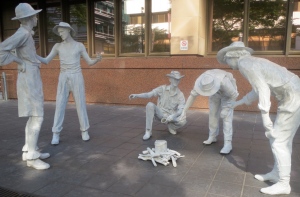