FOR months now, I have been meaning to stop in and have a look at Newstead House but it’s a busy road and I was never quite sure where to turn off or how to find it.

It always had something of an air of mystery about it as it is so much at odds with its road-locked location.

Crawling through a traffic jam at sunset today, I made a last minute decision to swing through the gates – and was very glad I did. The place is magnificent. 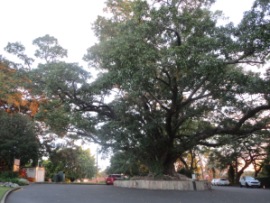 And I’m not even talking about the house yet, as it was closed by this time. The surrounding gardens and park on the riverfront are just beautiful.

I learnt that Newstead Park is a significant historic park for Brisbane, on land purchased by Patrick Leslie in 1845, to build what is now known as Newstead House.

It was relatively quiet at this time, apart from a few joggers, and perfect for a late afternoon stroll.

I’ve often driven past the big home on the low green hill and never once realized it was riverfront, its manicured lawns stretching down to where Breakfast Creek runs into the Brisbane River.

Near the entrance, there is a huge, spreading Cunningham fig, which is believed to be more than 200 years old.

I didn’t even head for the house (that’s for another day) but also near the entrance is a beautiful brick building that on closer inspection turned out to be a power substation. 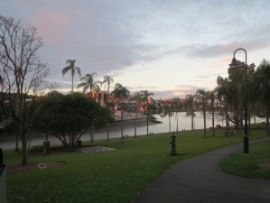 It was built by the Brisbane City Council in the 1920s to service a tramway system in the grounds.

It closed in 1969 and is now used by the Queensland National Trust which would explain its majestic appearance and surrounding gardens.

The lawns then drop away down to the river and the creek but around the park are various signposts giving historical details of the decades from the 1820s onwards, each with a botanical reference.

It seems the area has played a big part in Brisbane’s history.

Down at the river is the John Oxley landing , where the New South Wales surveyor-general John Oxley, after a voyage up the Brisbane River in December 1823, proposed a settlement be established adjacent to the deep water anchorage at the mouth of Breakfast Creek.

The convict settlement of Moreton Bay closed in 1839, and in 1859, the Colony of Queensland was proclaimed with Brisbane as its capital.

The landing spot is now beautifully landscaped with steps leading down to the waterfront and expansive river views and directly across to Hamilton hill.

At the top of the steps is a superb specimen of “sausage tree”, something you don’t really see that often.

I don’t know its botanical name but as kids we always called them sausage trees because of the large hanging sausage-like fruit.

There’s also a pagoda, which would no doubt be appreciated for summer sun cover, to sit and watch the river traffic.

Another discovery was the wall facing the river that declares an area as Lyndon B. Johnson Place, which I suspect was named to commemorate the day in 1966 when the Texan became the first US president to visit Australia.

This area also has a tall eagle-topped column.  Erected in 1951, it was the first American war memorial in Australia and commemorates the assistance of the US in the battle of the Coral Sea.

The grounds of Newstead House were occupied by US forces during World War II.

Apart from the beauty of the park itself, it is full of points of interest.

There’s a squat stone plinth down by the wharf which, according to the attached brass plaque, was “an electric tide recorder presented by the British India Steam Navigation Company Ltd to the Government of Queensland in 1959 to celebrate Queensland’s centenary.”

It gave the tide height at Newstead Wharf.

Wandering on around the house, which is the centerpiece of the park, it’s a mass of green, either the bright green of the lawns or the deep green of all the trees and bushes.

A river walk appears to stretch right back to Teneriffe and New Farm but as the sun had set by now, that will have to wait for another day of exploration.

Back on the city side of the park is a playspace for children themed as Alice Through the Looking Glass with a maze, pictures embedded in the footpath and a tree with the white rabbit.

Feeling very pleased with myself for finding another unexpected gem, I set off home and didn’t even curse the peak hour traffic … much.