IT never ceases to amaze me how much green space there is in Brisbane which, after all, is a state capital and quite a bustling nerve centre.

Post Office Square, named quite obviously because it is opposite the General Post Office, is the case in point.

There’s a decent coffee nearby and thanks to the Brisbane City Council’s Chairs to Share program, tables and chairs are set up each day and canvas loungers are deposited around the square in a micro-version of London’s Hyde Park on a warm day.

It is between two of the busiest streets, Queen and Adelaide, and over a collection of shops, mainly food places, so it seems this is the place to go to buy your lunch and eat in the great outdoors if you are a city worker.

There are lawns, shade trees and seating and great views.

At one end is the magnificent post office building and at the other, Anzac Square across to the Central Station tower.

It was opened in April 1984, and has stairwells and escalators linking the levels as well as a rather interesting, shiny circular stairwell that looks like it may have once been a water feature. Perhaps it still is, but there wasn’t a drop in sight.

At the Anzac Square end is a heritage-listed statue of Major-General Sir William Glasgow who faces the war memorial.  He served in the Australia Army during World War I and also represented Queensland as a senator from 1919-1931.

The pigeons don’t have a lot of respect for that, and can often be spotted leaving spots on his hat.

The realistic bronze statue is on a granite plinth and he’s dressed in the Australian Light Horse uniform and holding a pair of binoculars.

The statue has an interesting background. It was one of the last commissioned works of Daphne Mayo, a prominent Australian sculptor born in Sydney in 1895.

It was commissioned in 1961, completed in 1964 and dedicated on Armistice Day 1966 by Prime Minister Sir Arthur Fadden.

They obviously took their sculptures various seriously in those days.

It first stood on the old Police Station site at the corner of Ann and Roma Streets, was moved down the street to the triangular reserve at the intersection of Albert, Roma and Turbot Streets in 1968, was heritage listed in 2004 and in 2008 moved to its present location.

I imagine this was because it was no longer prominent after the motorway exit flyover opened and of course, it is much more appropriate that he should look across to Anzac Square.

Post Office Square was the starting point of Occupy Brisbane in October 2011, as part of the global Occupy movement that had started in Wall Street a month earlier. 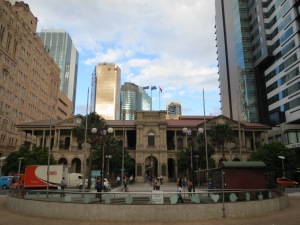