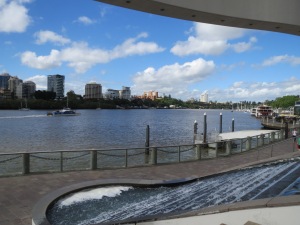 LIKE many great cities of the world, Brisbane grew up around a river and like other great cities, old docks and wharves have been converted to inspiring recreational spaces.

The Eagle Street Pier precinct comes as a surprise. One turn from the busy city street where high-rise towers grow in abundance and you enter a peaceful riverside playground.

The area is Brisbane’s leading dining zone but is beautifully laid out as it steps down to the riverfront walkway which gives splendid views of the river, Story Bridge and back to the city.

Once the main wharf area for a developing city, the only pier now is for the Riverside CityCat stop and the little ferries.

The area was first established by the Australasian Steam Navigation Company which built the first wharf in 1858 for coastal passenger and cargo ships. It was extended upstream and downstream in 1864, and by 1900 the company had five adjoining wharves along a 270 metre stretch of the river.

The last vessels stopped coming in 1960 and the wharf fell into disuse. For almost three decades it was rundown and abandoned, used as a car park with little attraction for anyone.

That changed in 1989 when the site was redeveloped as Eagle Street Pier, an architecturally stunning riverfront precinct. It’s the perfect place to saunter along the river walkway before stopping in at any one of many dining areas and bars.  There’s also plenty of public seating just to sit and enjoy the ambience and the view.