REMINISCENT of Sydney’s Queen Victoria Building (on a smaller scale) the heritage-listed Brisbane Arcade is one of the city’s oldest shopping centres but, in its original 1923 condition, also one of its most beautiful.

Running between Adelaide Street and the Queen Street Mall, it is a model of the traditional shopping arcade that was popular in Europe in the late 18th century and is worth stepping into just to experience its splendor. There are not many places like this around.

It’s now managed by the trustees of the Mayne estate and profits benefit the University of Queensland Medical School and medical research but it’s story is much more interesting than that – a story of scandal and great philanthropy.

The arcade is on the site where an Irish immigrant, one Patrick Mayne, had his butchery and family home.  When he died in 1865, rumour had it (“Brisbane’s worst kept secret”)  that he made a deathbed confession to murder and robbery and worse, he had let someone else hang for his crime while he went on to amass great fortune and property holdings.

Patrick had a reputation of being a cruel and brutal man, widely feared and despite his great wealth, he never quite made it into polite society as he so desperately wanted.

He had six children, none of whom married – and some also had their own attached scandals of murder, mental illness and … homosexuality, a crime in its time.

Generally, they may have been rich but there was not a lot of happiness for the Maynes.

Brisbane Arcade was built for his two youngest children, Dr James who deserves much greater credit for his efforts to improve the family name than he received, and Mary Emelia.

When they died in 1939 and 1940 respectively, the family’s vast estate and wealth mainly benefited the University of Queensland.

James Mayne donated the land where the university now stands and gave his name to Mayne Hall.

The Mayne Inheritance, by Rosamund Siemon tells the full fascinating story of the family, which in many ways, history has maligned given their huge contribution to the public good.

Their questionable family history and failure to make the social rankings of the day lingers on but that only adds to the allure of the Brisbane Arcade. 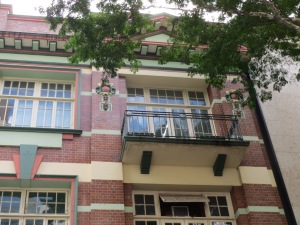