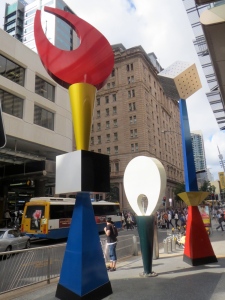 IT’S a bit weird and I don’t really get it, but  it is big and colourful and tends to dominate a major CBD street, so I felt obligated to find out a bit more about it.

It’s a three-piece art work outside the Queens Plaza just where Edward Street meets the end of the Queen Street Mall, and it’s called Echoes from the North.

I must confess I don’t really get the name either. Echoes from the north in Brisbane? What’s that all about?

Anyway, I do like the bright colours which could be interpreted as the Sunshine State’s sunny skies, beaches and water. And it distracts attention from the adjacent underground carpark exit.

It’s also dominant and is the sort of thing I would normally photograph if I was in any city but my own, which is a Brismania selection criterium.

Echoes was installed in 2005, is by Melbourne sculptor Augustine Dall’Ava and was commissioned in 2004 by a retail group. 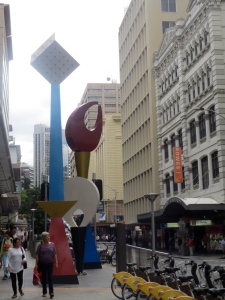 The attached plaque describes it with what appears to be the artist’s statement:

“Echoes from the North 2004-05, is an optimistic group of sculptures that can be seen over time and space yet leave room for mystery and personal interpretation.

“The form and highly reflective metallic colours are visual signifiers associated with Brisbane and the natural environment of the State of Queensland.”

It is made of mild and stainless steel with auto enamel paint and is very big – the tallest reaches 8.6m, the second 7.6m and the third, 3.7m. The colours are brilliant.

It’s also rather intriguing how the cube and the crescent that looks like a giant crab claw, are balanced on top of the irregular stacks of shapes.

Dall’Ava was born in France and came to Australia as a child and there is no doubting his credentials as his works are in public and private collections around the world and he has a long list of solo exhibitions and awards to his credit.

There’s no missing this one, even if you wanted to.