LOTS of rain followed by a holiday in Sydney has meant poor Brisbane has been neglected at a time when it was enjoying the company of 20,000 British Lions fans wandering the streets in their red shirts.

The City Botanic Gardens is such an obvious part of Brisbane’s attraction that it is one I haven’t rushed to investigate, preferring to seek out the less-worn path first.

Having said that, it is now firmly on my list of places to go for a retreat from the city, which is quite amazing as it really is only a few minutes walk from the CBD.

It was certainly a popular spot for  the red-shirted visitors who were trawling the gardens like gangs of ladybirds. 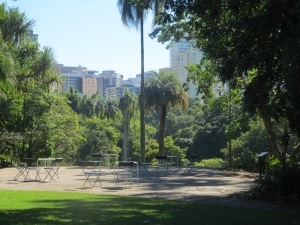 I have also now discovered there are two botanic gardens, one the Brisbane Botanic Gardens at the bottom of Mt Coot-tha which is a few minutes drive from the city (and is yet to be explored) and the City Botanic Gardens, which are the original gardens opened as a botanic reserve beside the river in 1855.

Apparently, the Mount Coot-tha Gardens were opened because the river flooded so often it was washing away rare species and something had to be done about that.

The City gardens are on another peninsula in a curve of the river which is, not surprisingly, known as Gardens Point and is accessible from one of the river ferry services or on foot from any part of the CBD.

The area was first established in 1828, only three years after European settlement at North Quay, to provide food for the penal colony and then became the botanic gardens in 1855 when the curator Walter Hill was appointed first superintendent. His name crops up a lot.

So, back to the gardens. They are open 24 hours and the pathways are lit at night. It seems they are safe as I haven’t heard of any muggings there (which isn’t to say they haven’t happened)

A walk around the perimeter is 1975m or 2475 steps, according to a sign, but that’s not taking into account the central paths.

I started at Edward Street entrance where a treed path follows the river with great views of the water, the Kangaroo Point Cliffs and mangroves on one side and bushland on the other.

Some paths wind through rainforest, others past lakes, fountains and statues and there are great expanses of lawn as well as a circle of Royal Cuban palms (Palm Henge?).

A sign explains that this palmy area was originally called Queens Park and was used as a sports field. In 1919 it was filled with soil when the riverbank was graded, and planted with the palms. 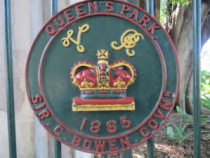 Some of the older trees were the first of their species to be planted in Australia due to Walter Hill’s experiments in acclimatising plants. He introduced mango, pawpaw, ginger, tamarind, mahogany, poinciana and jacaranda trees as well as tobacco, grape vines, wheat, tropical fruits, tea, coffee and spices.

In April 1862, Queensland’s first granulated sugar was produced at the gardens and of course, there are the figs that are everywhere around Brisbane. There are also cycads, bamboo and bromeliads.

In 1916, the City Botanic Gardens were formed by the amalgamation of the original botanic reserve with the Domain on the southern side of Gardens Point and Queen’s Park which brought its total area to 20 hectares.

The old curator’s cottage is now an elegant feature at the centre of the park.

At another corner is the River Stage, which was opened in 1989 and is comparable with Melbourne’s Sidney Myer Music Bowl.

As an interesting aside, the gardens were home for more than 100 years to Harriet, a tortoise reportedly collected by Charles Darwin during a visit to the Galapagos in 1835.

In 1860, she was donated to a zoo that was in the gardens until 1952, by John Wickham, a former commander of Darwin’s vessel of choice, the HMS Beagle, who became a governor of the settlement. Harriet spent her last years at Australia Zoo where she died in 2006 at a guesstimated age of 175 years.

The Queensland Government Heritage Register describes the City Botanic Gardens as “The most significant, non-Aboriginal cultural landscape in Queensland, having a continuous horticultural history since 1828, without any significant loss of land area or change in use over that time. It remains the premier public park and recreational facility for the capital of Queensland, which role it has performed since the early 1840s.”

There’s a great A-Z guide of all the brilliant features of the gardens at the Brisbane City Council site here so you can take a self-guided walk or there are free guided tours.