SATURDAY was Open Day at Government House, the home of the Queen’s representative in Queensland, but I clearly misunderstood the word “open” so a Brismania adventure has gone all wrong.

However, the white tower of this splendid building does stand out in its hilltop spot in Paddington enough to raise the curiosity of passing motorists, so my visit still needs to be recorded even though a view from the street is as good as it’s going to get for any of us.

My mistake was assuming that “open” meant the chance to have a good look around the place which, like Buckingham Palace, is behind gates for most of the year, and to record the findings.

“Open” actually meant that the grounds were full of marquees representing many worthy Queensland community organizations. There were choirs and bands, and the average Queenslander could bring a picnic and sit on the lawns and amid rose gardens for lunch.

There was also a so-called tour through the house, which was really just a run through a couple of the rooms and anyone (me)  who thought it was going to be like a tour of an English stately home or one of the great palaces of Europe, was going to be bitterly disappointed as there were no photos allowed under any circumstance whatsoever.

In fact, I was referred to the web if I wanted a photo!

This, apparently, is because some of the large artworks are on loan from the Queensland Museum.  So, how about we don’t use a flash? No! How about I photograph that chandelier or the dining table where there is not a hint of an artwork? No. The staircase? No.

OK, I finally got the big picture if not the ones I wanted so, unlike those magnificent homes that share their history in most parts of the world, Queensland’s most stately home is off limits.

This Brismania adventure therefore must be confined to what can be seen when driving by and a little background gleaned from the booklet with the day’s program that was handed to visitors.

It was built by Johann Heussler, a wealthy Brisbane merchant, in 1860 and called Fernberg, which is German for “distant mountain”. That is now the name of the road where it stands.

It was built from concrete and local rubble and occupied by the Heussler family until 1872 when they fell on hard times and had to sell.

It then had a strong of owners until 1910 when it was leased by the State Government as what was planned to be a temporary Government House.

Some repairs and a spot of maintenance were undertaken to make it fit for its first vice-regal occupants, but it was another 27 years before it was given a proper overhaul with the addition of a drawing room and investiture room and a bedroom suite.

This new wing substantially increased the size of the house and then in 1953, a small unroofed balcony was built to the east of the main building. This was extended and roofed in 1987 and then it was all given a major refurbishment in the 1990s.

It’s now a stately building on top of a hill. The rest of the hill is given over to its gardens that, unlike the English homes, aren’t manicured but rather retain the Australian bushland.

The dining room, which features a huge yellow ash table, is where the Queen often dines when she visits the colonies Down Under.

This, with the investiture room and drawing room, was the main highlight of the tour.  It lacks the sheer opulence of its English counterparts but does come across as more Australian than English, unlike Government House in Sydney, which isn’t a bad thing.

However, since the interior is not generally open for visitors there isn’t much point in waxing lyrical about them but rather, we will have to do as recommended, and just have a look at the pictures on the web! 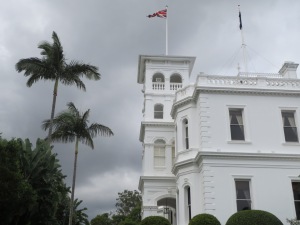