WANDERING down to the General Post Office, I was surprised to spot a rather tall sculpture attached to the wall of a building which forms one side of Post Office Square.

I was even more surprised to see that it had been put there in 1970. Now that escaped my attention for a few decades!

The attached plaque says: “This sculpture was created by Len Shillam and fixed to the building in 1970. It represents bankers and the industries they assist”.

It’s quite effective, giving a nod to both primary and manufacturing industries, in a 17-metre high cast aluminium work officially titled “The Banker” – a not surprising choice of title as it is was commissioned by the Westpac Bank for the wall of its building.

According to Judith McKay’s Brisbane Sculpture Guide: A Walk Around Public Sculpture in the City “The doric columns and entablature over the money-changer refer to the stability and antiquity of banking”. 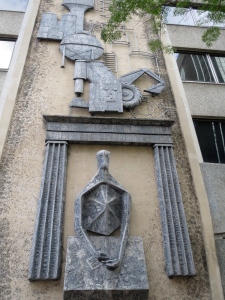 A little research reveals that Leonard Shillam (1915-2005) was a founding member of the Queensland Society of Sculptors and the Queensland Wildlife Artists Society.

He received the Order of Australia in 1986 for services to sculpture and education.

Shillam sculptures are “a permanent record on many public buildings in the city of Brisbane” so I shall have to go in search of some more.