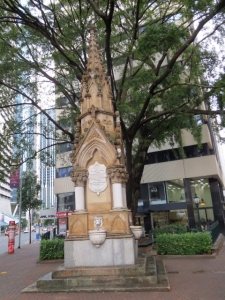 WHAT do a gothic water fountain looking strangely out of place in the shadow of modern skyscrapers; a fireman killed when a keg of rum exploded; and a century-long controversy for the good folk of Brisbane have in common?

The story begins when, during a saunter down to the Eagle Street markets, I spotted an elegant fountain, complete with marble lion’s heads from which water obviously once flowed, but does no longer.

It’s in a paved courtyard in front of a very nice French cafe and in the shadow of a big old Moreton Bay fig planted in 1930 (fig trees seem to turn up everywhere in these parts) at the intersection of Eagle and Queen Streets. 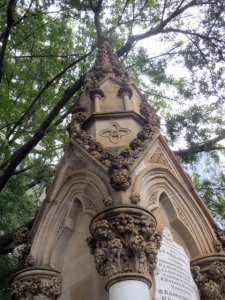 A relatively new-looking attached marble plaque says that it is dedicated to the memory of James Thomas Mooney, a young volunteer fireman who died on March 25, 1877, after being burnt while fighting a fire and also adds it is to all firemen who have made the supreme sacrifice.  Nearby, another sign contains the words of the fireman’s prayer.

The plaque was actually attached in Australia’s bicentenary year 1988 and it would seem that it settles an old argument.

In around 1876-87, the good city fathers decided to build a water fountain (or a urinal, they weren’t sure at first) as a civic beautification project.

A number of nearby businesses, keen to make an unsightly patch of dirt near their premises more alluring, contributed.

It turned out to be quite an expensive project – £370, a princely sum at the time and was funded part by the council and part by public subscription.

Businessmen had already raised £50 when tragedy struck poor young James Mooney, who had been born in New York in 1855.

Mr W. Hughes the grocer was also a wine and spirit merchant. A fire broke out in his store on Refuge Row near Queen Street on March 23, 1877, and volunteers turned up to help put it out, 22-year-old Mooney among them.

Alas, a barrel of rum exploded and the contents sprayed over Mooney. According to the account, of William Burgess (a grocer’s carter who died in 1943, aged 85) it turned him into a human torch. 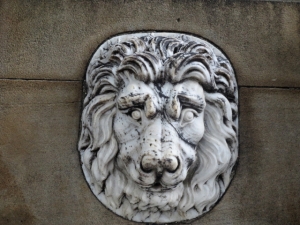 His mates rolled him in the thick dust of Queen Street but he died from his injuries three days later.

A public appeal was launched to honour him but this subsequently became confused with the appeal already underway for the water fountain, triggering a public funding debate that was to last a century.

When the fountain was officially built in 1880, there was no mention of Mooney but rather, it had a barely legible listing of the names of the  aldermen of 1879 and the sculptor.

In the minds of the public though, the fountain was for Mooney.

The Brisbane Courier has various letters to this effect, not only from the day but also from the 1920s, 1930s and again in the 1950s until the 1988 plaque finally put the old argument to rest.

The fountain itself was Brisbane’s first to mark the opening of the city’s water supply. It is one of only two 19th century fountains in Brisbane and is “an interesting example of eclectic Victorian taste, resembling a Gothic cathedral spire with flowered and foliated capitals and creasing and white Sicilian marble basins with lions heads”.

It was designed by city engineer William Holloway Chambers and carved by local sculptor William Webster.

The fountain has another US connection, and another tragedy at that.  During World War II, in 1942, a drunken American sailor tried to climb the 10-metre high monument. He broke the ornate finial before falling to his death.

And to wrap up the Mooney story, funds raised during his appeal actually went towards a memorial for his grave at the Toowong cemetery and the fountain is now known as the Mooney Memorial.