SOMETIMES you can walk past a place a thousand times and not take any notice and then along comes someone else and, through new eyes, you spot something that’s quite astounding.

Such is the case of the strangler figs on the corner of Palm Avenue and Rainbow Street at Shorncliffe and also on the little island at the junction of Elizabeth, Creek and Eagle Streets in the City.

It wasn’t until a Japanese exchange student took a photo of the Shorncliffe trees tangling like an enchanted forest before dripping to the ground that I realised that this was something quite special and now I discover there is a similarly fascinating spaghetti mix in the CBD.

I have often encountered large fig trees with buttress roots in rainforests and was once told how the parasitic strangler figs drop their seeds into the tops of other big trees and then gradually take them over, growing from the top down, but it is unexpected to find such stunning examples in city streets.

The small triangular island at the intersection of three busy streets was given to the people of Brisbane by Queen Victoria in May 16, 1889 – 124 years ago today –  as a “reserve for plantation” and the fig trees were planted to provide a shady place for workers to rest.

There were two Ficus virens – deciduous Australian white figs – and a Ficus benghalensis – an Indian evergreen Banyan – and at the time, they were near a creek which once ran from Roma Street through the city along Creek Street (wonder where that name came from?) and into the river at Charlotte Street. 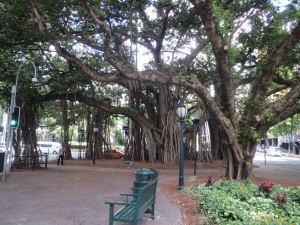 The trees have prospered over the past 124 years and today are a huge burst of green on their little island in the middle of the traffic. 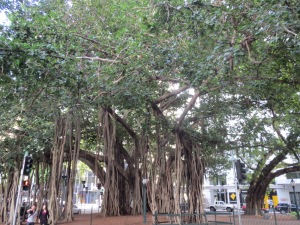 There are a few plaques scattered about the place telling the story of how it all came about and showing a map of the old Creek Street creek.

One interesting tidbit imparted there is: “It is said by the late 1820s, the then convict settlement’s wheat fields extended on either side of the creek in this area and that the creek was known as Wheat Creek.

“Shipping was the main means of transport, bringing in supplies and immigrants and taking away the produce of the fast developing settlements.

“With the decline of shipping as the main form of transport, associated activity in this area of the city decreased.

“However, with extensive building development, this area has again returned to prominence, bringing a new commercial heart to the city.  These old fig trees have become a significant part of the environment and are listed by the National Trust of Queensland and the Australian Heritage Commission.” 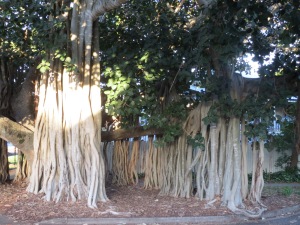