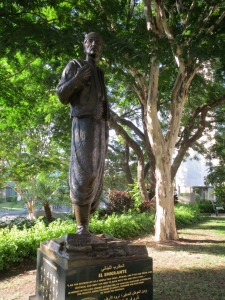 ANYONE would think Brisbane was the City of  Churches – it’s not, in Australia, that title belongs to Adelaide – but while I keep finding splendid old churches, I am more taken aback by the number of cathedrals in place names.

Having previously come across Cathedral Place and Cathedral Village, today I found Cathedral Square Park, named no doubt because it is right opposite St John’s Cathedral.

While this is a beautiful garden of almost one hectare between Turbot and Ann Streets off Wharf Street, it is also home to a particularly fine and fascinating statue that stands under some big old leopard trees on an elevated lawn near Turbot Street. 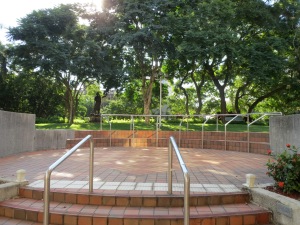 From a distance it evokes a picture-book image of Sinbad the Sailor but on closer inspection, it is actually  “In honour of the early Lebanese settlers, who, 140 years ago, established a presence in this country, sewing the bonds of loyalty, friendship and hard work. We thank you Australia”.

It was unveiled n February 2010 and, as well as a brass plate showing the Phoenician alphabet, another states “El Emigrante” and “I am the descendant of a people that built … Byblos, and Tyre and Sidon, and Antioch, and now I am here to build with you and with a will…”

He’s a beauty, standing more than two metres tall on his raised plinth, and bringing to mind images from childhood stories about the Arabian Nights, Aladdin, Sinbad and the mysteries of the Middle East, magic carpets, and white horses galloping through the desert.

The park itself is serene and an oasis in its own urban desert, for while there are paved paths, they are a feature among all the green of the huge old trees and lawns and the verdant raised garden beds. 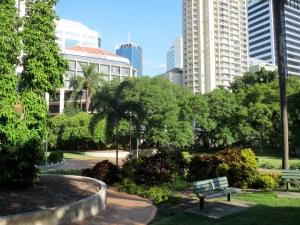 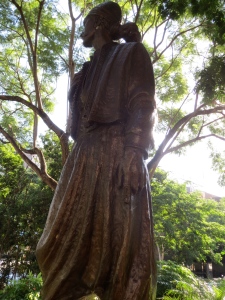 There’s an amphitheatre of sorts, a feature of shade sails and a water feature (that doesn’t have any water).

Cathedral Square has plenty of seating in different environments within the park but most have a view of the spires of St John’s Cathedral across the road which is also reflected in the glass of a building which forms the back end of the park.

The shopping centre is just around the corner, so it’s an opportunity to grab a coffee and a picnic and settle in for a moment of peace in a magic spot. 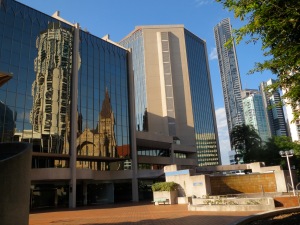 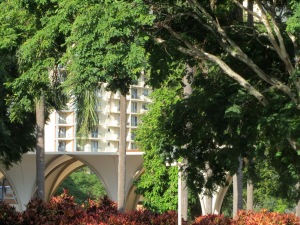 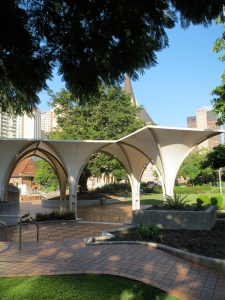