MANY years ago, on the outskirts of Salamanca in the Spanish countryside, I visited a cathedral, or what there was of it – a stone foundation and some Corinthian pillars.

Salamanca also has another old cathedral that never quite made it, although there is substantially more of it than the one I discovered in the middle of nowhere.

Either way, Brisbane’s unfinished cathedral has even less than either of them. Only two perimeter walls are left, standing testament to what was once a grand vision.

Across the road from Centenary Place where the City and the Valley meet, is a grand stone wall which is such a curiosity it just begs for its story to be told.

There is a sign on one section of the wall that briefly outlines its story.

This beautiful wall, which now encloses part of the Cathedral Place residential development, is all that is left of Archbishop James Duhig’s dream to build the finest cathedral in Brisbane and indeed, the largest of any denomination in the Southern Hemisphere.

The site was known as Duncan’s Hill, named after Brisbane’s first Collector of Customs, William Augustine Duncan, who built a single-storey Tuscan-style home which he called Dara around 1850. 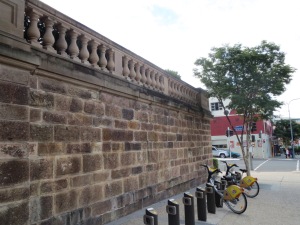 It was acquired by the Catholic Church in the 1860s and became the home of  Bishop James Quinn and later, Archbishop Robert Dunne.

In 1891, Dara was demolished and replaced with a much grander residence befitting an archbishop and in 1917,  James Duhig, succeeded Dunne as the Roman Catholic Archbishop of Brisbane.

He decided that his own address was the perfect site for a new cathedral and engaged his architect, Jack Hennessy of the Sydney firm Hennessy and Hennessy, to draw up plans for a massive Renaissance basilica.

As Duhig had already successfully completed a number of projects, including churches, hospitals and schools, in the Brisbane area, it probably didn’t seem too far-fetched an idea at the time.

A deal was done with Brisbane City Council, which accepted the donation of land to widen Ann Street in exchange for permission to build a retaining wall along Ann Street in front Dara, which was marked for demolition.

The council also resumed land in front of the proposed cathedral’s forecourt for a park which it called Centenary Place, in 1924. (see Day 34)

The good archbishop moved out of his comfortable home in February 1927, and in June, turned the first sod on the site of his grand cathedral, assisted by the Mayor of Brisbane William Jolly, and a leading benefactor and Valley department store owner T. C. Beirne (perhaps Day 34: Centenary Place should have been called Burns, Byrnes, Beirnes!!).

At the end of 1928, the foundation stones for the Holy Name of Jesus Cathedral were dedicated in an impressive ceremony that drew a crowd of thousands including national church and political leaders.

Marble and soil from the catacombs in Rome and Irish soil were buried under the foundation stones as well as newspapers and coins.

The fanfare  though wasn’t enough to stave off the Great Depression which hit soon after and construction came to an end. There wasn’t enough money around for Renaissance cathedrals.

Archbishop Duhig wasn’t about to give up just yet though, and ordered completion of the crypt which opened for worship in 1935.

And that was the end of it. What little remained of the dream died with Duhig in 1965 and the Holy Name Cathedral’s foundation stones are now at St Stephen’s Cathedral in Elizabeth Street.

The Catholic Church sold the land in 1985 and in 1992 the crypt was demolished, leaving only the beautiful stone walls with a few grottos to show for the grand aspirations of the 1920s.

In 1999, a development company came up with a new vision for Cathedral Place and the 1.5ha site was turned over to a residential development which kept only the name – and the walls.

As a nod to the past, the apartment blocks around a central swimming pool were called Notre Dame, Cambridge, Oxford, Sandringham, Westminster, Kensington, Canterbury and Duhig.

St Stephen’s Cathedral in Elizabeth Street has remained the seat of the Catholic Archbishop of Brisbane. And that’s another story.