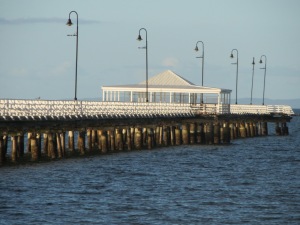 TODAY  I visited my sister in the north-eastern suburb of Shorncliffe and although I have visited her there many times– and even lived there for a time – I am ashamed to say I had never taken much notice of the pier.

Yes, I’ve visited Brighton’s famous pier in England a few times and walked the Scheviningen pier near The Hague in Holland many times and now I can say I’ve been to Australia’s Shorncliffe Pier.

And I wasn’t disappointed, well perhaps a tad because it’s closed for safety reasons at the moment and not due to reopen until 2016, but it’s nevertheless a location that’s well worth visiting.

It’s all my own fault really as I only just missed out on it – Brisbane City Council closed it in March 2012 when it found a number of its piles, headstocks and girders were in such poor condition that there was too high a risk of structural failure to let the public keep using it.

And that’s not surprising as the Shorncliffe Pier, Brisbane’s largest timber pier, was designed by FDG Stanley in 1882 and made of ironbark logs supporting a timber deck, opening around 1884.

Stretching 350 metres into Bramble Bay, it is one of the longest recreational piers in Australia.

It was first called the Sandgate Pier as Sandgate was Brisbane’s first seaside town and the pier was just the place for fashionable 19th century visitors to promenade or catch the steam ferry across the bay to Humpybong on the Redcliffe Peninsula.

A rail line from the city to Sandgate opened in the early 1880s (today the pier can be reached by a pleasant walk from Shorncliffe station) and about the same time, a privately funded group The Sandgate Pier Company formed “to conduce to the advancement of the interests of this city, and speedily become the terminus of a railway, connecting the bay with the Metropolis”.

Although it was first thought it could be used as a goods pier with a railway line along it, this idea was abandoned (the water is quite shallow) and instead the pier established Sandgate as a seaside tourist destination.

Ferry services stopped operating in 1928 as Sandgate’s popularity among beachgoers waned and it was virtually bypassed when the Hornibrook Highway bridge to Redcliffe opened in 1935.

Repairs have been carried out over the years but the Shorncliffe Pier is now due for a major overhaul and its closure is sorely missed by the fisherman who have lined its rails and sat in its pavilion in recent decades.

For today’s visitor, it’s still worth the effort as even though the pier walk is unavailable, there are landscaped picnic and barbecue areas, a waterfront esplanade for promenading, a small beach and views to the Glass House Mountains, Redcliffe and across the river mouth to Wynnum, all with the bushy Shorn-cliffs in the background