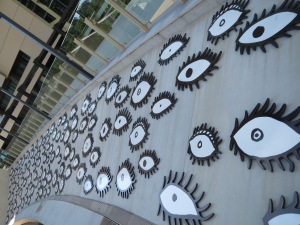 GLANCE left while wandering down George Street and you’ll get a distinct feeling of being watched – and you are!

So much for the night having a thousand eyes. They’re all right here all the time.

Taking up a whole city block between Roma and George Streets is a spectacle of eyes.

Stretching 90 metres across a wall in the court precinct between the Magistrates and Supreme Courts, the eyes are by Japanese artist Yayoi Kusama (born 1929) are made of steel and enamel and are called “Eyes are Singing Out”.

As well as being eye-catching (you don’t have to keep half an eye out for it, it grabs attention) it’s actually a very clever metaphor as the curator explains on an attached plaque:

“In a time when public accountability is of the utmost importance, Kusama’s eyes not only look back at you, they surround the courts with looking.

“Metaphorically, the process of justice is made transparent through the building’s glass façade to the unblinking eyes forever watching. The universality of Kusama’s graphic language is as at home in the context of ancient Egyptian hieroglyphics as it is in contemporary art.

“It is suggestive not only of a watchful public but also omnipotence, enlightenment and inspiration.

“While all senses are integral Kusama reminds us that it is through the experience of seeing another that our empathy for humanity is instigated and negotiated.”

Whew, that’s just what I was trying to say. 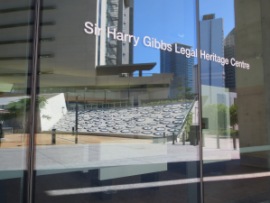 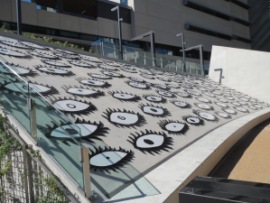