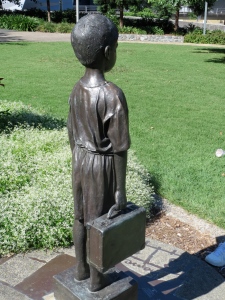 NEAR Roma Street station, at the intersection of Albert and Roma Streets, there is a restful park and in that park is a sad little statue standing all alone in the gardens.

It’s a small boy standing on a hopscotch pattern. But he didn’t know the pleasures of games like hopscotch as he represents all the children who suffered and of those who did not survive abuse in church and state children’s institutions and homes in Queensland.

He has bare feet and carries a tattered suitcase.

The bronze life-size Child Abuse Memorial by Gavan Fenelon, was unveiled on December 1, 2004. The inscription also quotes the Bible:

It’s an emotive work and looking down on him from Albert Street above, it oozes sadness, so the artist has well and truly captured the sense of the children who for one reason or another, found themselves in care during the 20th century.

The park is only small but there is seating and, between the City and Roma Street, it’s a delightful place to stop and contemplate the meaning of life.